I have a million things to say about how amazing our camps were this summer.  For now, I will talk about our first camp.  Then I will write a little later about our second camp.  In our first camp we had 25 campers with various disabilities along with 25 mothers or grandmothers.  The camp was from Sunday to Saturday.  We had a team of 5 people from the Sending Place.  Janet, Judy and Monty were all returning.  Cindy and Rachelle were both new to Ukraine.  This was an a amazing team, who really had a lot of fun together.  Cindy made multiple jib jab videos of the team, which were really fun.

Watching the team in action was a sight to see.  They really showed Christ’s love to these kids.  We also had my good friend Nolan Dunkly with us at camp.  Nolan had planned a trip to visit me, and we were going to travel Ukraine together, but when some problems with our camp date arrived, we had to move the camp a week earlier, so Nolan got to be in camp with us.

Our first day of camp we did a skit of the Good Samaritan.  I got to be the bandit who assaulted Nolan.  I proceeded to hit him a few times with a pillow, before “kicking” him down the steps.  Well, the next day, totally unrelated to our skit, Nolan threw out his back bending over, and all the moms were convinced it was me who hurt him!    Also, when Rachelle asked one of our interpreters Kostya,  if the extra juice box he had was for anyone and if she could have it,  he said, it was for Nolan.  But she heard that as “No one”  So she was really confused why he would not give her the juice box if it was for “no one.”   So that became our inside joke for the week.  “Don’t worry everyone, ‘No one’ is here!”   “Who won the game?”  “No one!”

Throughout our week, we had Bible studies every day, we sang lots of camp songs.  The American team had to learn a lot of songs in Ukrainian and Russian, which is very difficult.  They did a great job with the songs, crafts, Bible studies, games.  The kids had an amazing week.   Pictures are worth a 1000 words!  So I’ll share a few. 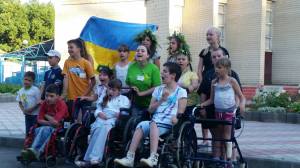 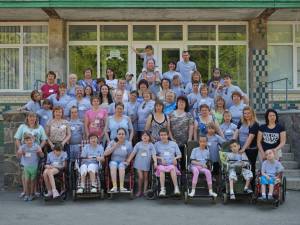 Thank you to the Sending Place for sending us an amazing team and for funding our camp!

Also, I want to thank the Twito/Rohrs family, especially Anna Rohrs, for teaching me the card game Big Kahuna.  That game is a huge hit here in Ukraine, I taught it to the kids in camp and they were playing every night.  We had a 10 year old chess champion in our camp and she had the best poker face I’ve ever seen! 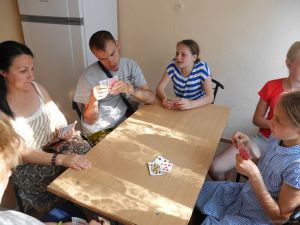